Fundraising is tough, time- and travel-intensive and needs a fair amount of salesmanship – not only for startups but also for VCs. Fund managers have to convince fund investors that they can make money for their Limited Partners (LPs). First, General Partners (GPs) need to build a strong portfolio by wisely investing into the best startups they can find. Then they need to create a lot of value post-investment by quickly growing their portfolio companies with the ultimate goal of realising successful exits, i.e. trade sales (the rule) or IPOs (the exception). GPs Rene Savelsberg and Wouter Jonk are Amsterdam-based smart energy VCs who raised their first SET Fund I in 2007 after having learned the trade as Corporate VCs at Philips. Up to now, they have 3 good exits under their belt: Epyon to ABB in 2011, AlertMe to British Gas in 2015 and Sefaira to Trimble on 8 February 2016. Good exits are a key requirement for raising a second fund as LPs look for track record in terms of proven capability to generate returns. Yesterday, SET Ventures announced the first closing of SET Fund II at €60M and plans to add a few more LPs until March 2016. 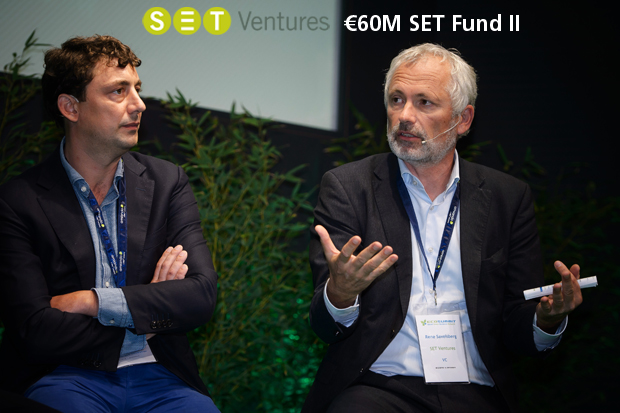 The LPs of SET Fund II are the European Investment Fund (EIF) who prefer to be the largest LP as they have lots of capital to allocate, the Finnish fund-of-fund Sitra, Shell Technology Ventures, the Dutch utilities Essent (part of RWE) and Delta, the Belgian family office Korys and the 2 regional development funds PPM Oost and BOM in the Netherlands.

Due to early commitments from the anchor investors of the first fund, Essent and Delta, SET Ventures was already able to invest in 4 startups out of SET Fund II: Sefaira, Luxexcel, 4energy and Sonnen. The German battery pioneer is the portfolio star that recently entered the US market to challenge Tesla on their home turf and currently raises a massive €50M round.

SET Ventures plans 6-11 new investments until the end of their investment period in 2018. During our phone call Rene pointed out that SET Ventures isn’t a general cleantech fund but rather a focused smart energy investor who wants to create impact in the energy industry and foster the energy transition with the help of disruptive software and hardware startups. And focus is a necessary recipe for success – not only for VCs but also for startups.