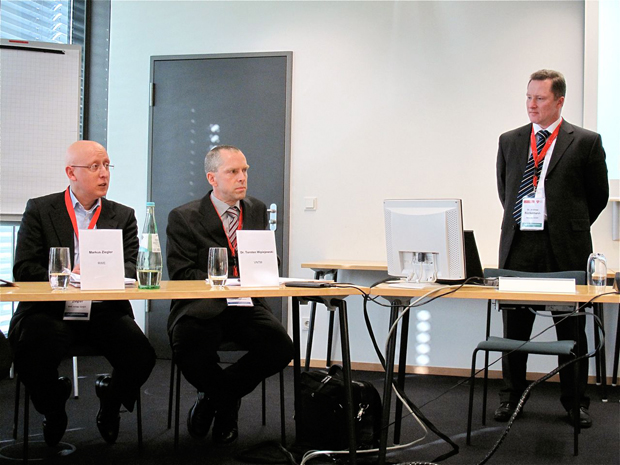 On the left, the photo shows Marcus Ziegler, Executive Director of RWE Innogy Venture Capital, making an introduction to Dr. Andreas Rückemann, CEO of OPV maker Heliatek, prior to his investor pitch (standing on the right). In the middle is Dr. Torsten Wipiejewski, Partner of the Finnish Cleantech VC VNT Management. RWE Innogy is invested in Heliatek and Marcus stated that Heliatek has one of the best management teams he has ever seen. I agree, especially after enjoying a great discussion about the Smart Green City TXL+ in Berlin with Andreas afterwards.

OPV stands for Organic Photovoltaics where light goes in and electricity comes out. Andreas compared that to OLED (Organic Light Emitting Diodes) where electricity goes in and light comes out. You can easily see that both technologies have a lot in common and represent a new technology generation within the field of Green Photonics. In particular, Andreas forecasts a bright future for Organic Photovoltaics as organic PV cells will eventually have 3 main benefits: lower cost, higher form factor flexibility and no rare earths as raw materials. In 2011, Heliatek focuses on building their first OPV factory in Dresden which will go online in 2012.

The Cleantech session at HTPC11 introduced several more promising smart green startups. Next Kraftwerke pools rarely used (emergency) power generators into virtual power plants and sells that new electricity capacity to utilities. That’s a nice example of mixing smart software, hardware and connectivity with the philosophy of sharing products, in this case power generators, with new users over the Internet. If Next Kraftwerke manages to convince its clients to upgrade to clean energy generators, then their business model would be even better and more sustainable. 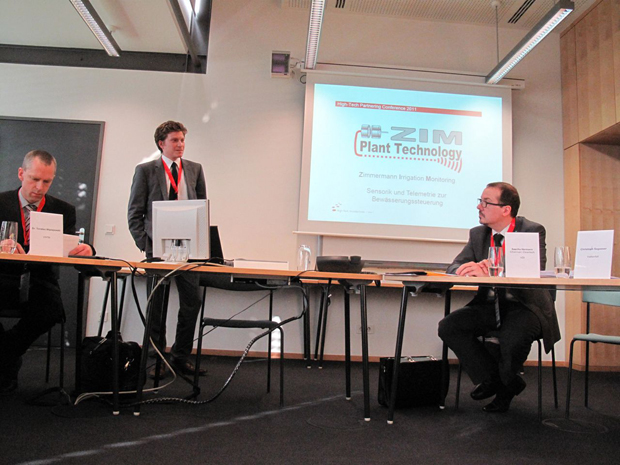 Totally impressive is the new water technology company called ZIM Plant Technology based in Hennigsdorf northeast of Berlin. ZIM’s young CEO Simon Rüger (see picture above) shared 2 taxi and 1 plane ride with me on our way back to Berlin. ZIM can talk to plants and their technology goes like this: they put the plant’s leaf between two small sensors and measure its blood pressure, i.e. the water level within the leaf. If the level is too low, the sensors wirelessly communicate back to a smart application that controls the irrigation system. Now ZIM has to prove that their solution not only makes the plants less thirsty and more happy but also results in higher yields and lower water footprints.

To sum up: thumbs up to HTGF for organising a fantastic event. Above all, I liked the pre-arranged speed dating sessions at the event and am very motivated now to include speed dating at ECO11, too. ECO11 Speaker @Justdoitalex and his team are rock’n’roll.