Our energy and climate crisis raises many questions about the viability of future products and services. They must take into account society’s needs, energy challenges and sustainability concerns. Green Photonics has promising potential to be smart, green and social at the same time. Are we just one step away from the Photon Century? 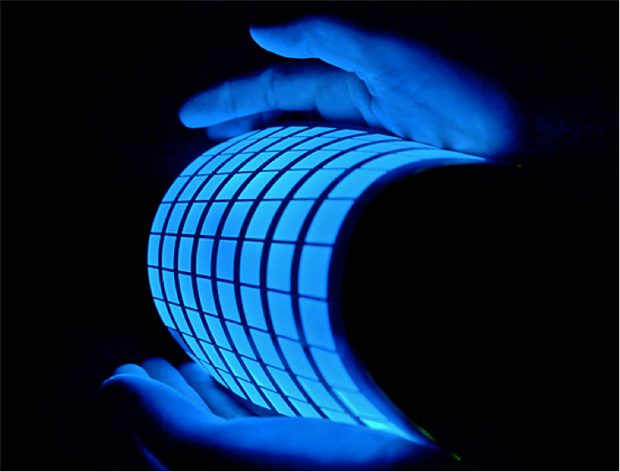 Green optical technologies are clearing the way into a new disruptive age with novel applications: Green Photonics generates and transmits light and by that save energy and enable communication. Green Photonics develops in different ways and will become commonplace in everyday life.

While the 2009-2020 CAGR (compound annual growth rate) for global optoelectronics is forecast to be 3.1%, the Green Photonics share is forecast to be a very encouraging 19.6%. These growth rates translate into $493 billion in revenue for optoelectronic components by 2020, of which $261 billion or 53% is the Green Photonics market share (OIDA). Light is the motor for green growth and Green Photonics is a deciding cross-sectional technology in many industries or industry sectors that are fundamental for building our Smart Green Economy.

Recent lead investments of VC (Venture Capitalist) Wellington Partners in Green Photonics companies such as Heliatek and Glo strongly indicate the increasing marketability of these technologies. Novaled from Dresden is a world leading enterprise in the field of OLED technologies and was elected as European Cleantech Entrepreneur of the Year 2010. Harry Böhme, CFO of Novaled, speaks at Ecosummit 2011.

Photosynthesis – the first green technology on our planet

First a little bit of philosophy. In the beginning was light. Light is the fundamental source of life on earth and light is at the origin of all that there is. Light is irrepressible energy that protects our environment. All the “Greenery” in the world, our biosphere surrounding us, everything is ultimately explained by the impact of light on earth.

Photosynthesis was the first green technology on our planet. Looking at it in this light (excuse the pun) photonics and Green have had a very long association. “Almost everything we know about the world, we have learned through the light,” says Prof. Theodor Hänsch, Director of the Max-Planck Institute for Quantum Optics and Nobel Prize Laureate.

Photonic applications generate, emit, transmit and modulate light. They sense, amplify and detect by means of light. The contribution of photonics is considered green if it generates or conserves energy, reduces pollution and yields an environmentally sustainable outcome (Source: OIDA, the Optoelectronics Industry Development Association). Green Photonics impacts on a field of cross-sectional technologies whose goal is to generate energy (photovoltaics), illuminate (solid state lighting and displays) and enable communication (glass fibers and optical networks). Important contributions are soon expected to come from manufacturing technologies (lasers) and from the enabling and improvement of energy efficiency (sensors for optimal energy use).

Photonics21 is the European technology platform for photonics. It unites 1400 companies and stakeholders from 49 countries. Have a look on the Strategic Research Agenda “Lighting the way ahead” (Download as PDF). Photonics innovations are key drivers for profitable growth. In September 2009, the European Commission designated photonics as one of five key enabling technologies for our future prosperity. This signifies not only the economic importance of photonics, but its potential to address what have been called the “grand challenges of our time”, said Martin Goetzeler, President of Photonics21 and CEO of OSRAM.

So what are the driving forces behind this exceptional growth for Green Photonics in Europe and beyond? The EU strives for 20% of the energy supply to come from renewable sources and a 20% reduction in primary energy use by 2020. That is not very ambitious. But all over the world new laws are coming into effect in which renewables are the preferred alternative. One of the best examples is the feed-in tariff.

Although PV (Photovoltaics) still has a small share, it is the fastest growing renewable technology. In the last decade the average annual growth rate of global solar cell production was 48,5%. It even accelerated in the past 5 years with the maximum growth rate of 68% in 2007.

The technology roadmap of the next generation PV and OLED (organic light emitting diods) promises new cheap, flexible and organic membranes, which will open new markets for mobile applications. Prof. Michael Graetzel just won the Millennium Technology Prize 2010 for the invention of the Graetzel Cell, a dye-sensitized solar cell. Konarka, based in Massachusetts near Boston, demonstrates the business case of flexible, transparent, thin-film organic PV.

At the same time, flat OLED screens will make it possible for a smart phone to bend in a reliable, robust manner. Philips has just released a prototype. Already last year Samsung had introduced a very smart, robust and flexible OLED flatscreen. Watch the Youtube video.

Light Plastics (= OLED) and Power Plastics (= Organic Photovoltaics – OPV) will probably merge into a hybrid membrane which will make it possible to transform light into power and vice versa. Imagine a smart phone being charged with the little daylight that passes through your trousers’ pocket. Or imagine a window that becomes a source of light during the night. All of this is within our reach.

Over 33% of lighting consumption could be saved with existing efficient lighting technologies. The lighting industry is now facing a paradigm shift to LED (light emitting diode). LED is a semiconductor which is already outperforming in terms of efficiency the existing analog light sources. The cool and innovative thing about LED-Lighting is that it is digital. This means that it can be accessed and managed via the Web: you can dim it, you can define the colour and you can direct the light wherever you need it. There are countless smart applications for LED-Lighting: e.g. ultraviolet disinfection with UV LED is already an approved method which dramatically improves the drinking water quality.

Nowadays, sensors are embedded in every smart application. While applications are increasingly becoming smarter, these tiny photonics devices can have major impacts. They are an enabler for reduced power consumption (think for instance of light management). And lasers improve efficiency by automated inspection. Optical communication technologies such as glass fibers lead to higher bandwidth and reduce power consumption at the same time.

ICT (Information and Communication Technology) already consumes more energy than air traffic does. Its annual increase in energy consumption is about 20% of which only network traffic accounts for 40%. The integration of photonics and electronics, the application of glass fiber, the miniaturization and new optical network architectures altogether have the overall potential of reducing energy on a very large-scale.

Clearly Green Photonics is a serious challenger on a global scale in increasing energy efficiency, stimulating the economy through the creation of highly skilled jobs and tackling some of the trickiest global societal issues in a more innovative and creative way.

Some barriers ought to be considered before using Green Photonics on a mass scale. Initial investments are often higher compared to standard products. Green Photonics may have a particularly tough business case because the pay-off usually runs from mid to long term – this contrasts with the quarterly shareholders’ perspective. Slow adoption rates and an aging population in Europe make future business difficult. Missing business models and the fact that prices only decrease with high volume production (chicken-egg problem) are also a factor.

So what is needed to accelerate the Green Photonic market? A Smart Green City such as TXL+ in Berlin in a Private-Public-Partnership would be a large-scale showcase. This would demonstrate the impact of next generation products in terms of costs, performance and energy savings. A real environment creates the opportunity to fully exploit the economical potential and the social impact of these technologies. A huge leverage would be providing sustainable procurement as a strong case for wider use to accelerate the market. A new thinking is required in so far as the full life cycle costs are concerned. And, of course, we need a strong, thorough and transparent regulatory framework for creating new business models.

Humans absorb more than 70% of information through light. Light is a universal tool and often provides revolutionary solutions. No phenomenon has fascinated mankind more than light. Many mysteries of light have been decrypted, but a lot are still waiting to be discovered. Knowledge never ends – new knowledge always means new questions.

Are we using all the opportunities that light is capable of providing? Probably not yet, but one thing is certain: Light is the future.