Based in Spain’s Basque country, Hiriko is the first company to build the electric City Car developed by MIT’s Medialab. Hiriko sounds Japanese but it is in fact a mix of Basque and Spanish: hiri = urban, ko = short for coche (car). Hiriko’s networked urban cars are designed to be used only as shared cars. Imagine a future where you can take any car when you leave your home or office. Imagine a future where all shared cars are electric. That’s where we have to be. 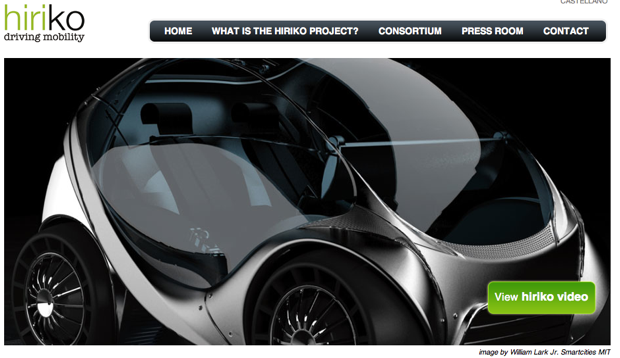 We live in a service economy. And we live in a sharing economy. Both trends grow continuously. Using products on-demand as services represents green consumer behaviour. Sharing products is ecofriendly as more users can be served with less products. Ergo we could produce less stuff. Sharing is especially attractive when we share goods whose production is expensive and consumes a lot of resources. Of course, this is the case with cars.

In fact, I am not the first one having identified the beauty of combining car and ride sharing. For example, there is the transportation visionary Robin Chase who first co-founded the car sharing operator Zipcar back in 2000 in Boston, followed by the ride sharing provider Goloco. In June 2010, Zipcar filed for an IPO with $150M revenues, 400.000 customers and 7.000 shared cars. Market growth expectations are high as Frost & Sullivan forecasts the car sharing market in the US and EU to reach $6B in 2016.

Daimler is the first car maker (OEM) that is executing its innovative car sharing strategy with a new brand. Daimler launched its one-way car sharing service Car2go in Ulm, Germany, (20.000 customers) and Austin, Texas, (10.000 customers) and recently announced expansion to Hamburg in early 2011 with 300 Smarts on an area of 65 km2 (4.6 cars per km2). In fact, Daimler is the first OEM manufacturing a car optimised for car sharing. The new Smart Car2go Edition includes a car sharing on-board unit, touch screen and solar roof. For Car2go’s European rollout, Daimler cooperates with the leading car rental company Europcar. Other car makers will soon follow suit and chase deals with Sixt and Hertz. In Ulm, Car2go has delivered 350.000 rides and 4M kilometers (11.4 km/ride), 90% of the rides are one-way rides. In Hamburg, Car2go will cost €0,29/minute including parking fees while the car rental hour is capped at €14,90.

The car sharing market in Germany is very fragmented and still very small. While we have 50M registered cars in Germany, only 6.000 cars are shared by 200.000 customers. Car sharing users in Germany are forecasted to reach 1.2M in 2016 in Germany. ARPU (Average Revenue Per User) and customer acquisition costs are rather high for car sharing companies. For example, Zipcar rewards new customers with $50 worth of free rides as advertised in Boston’s underground trains.

Increasing the number of shared cars can also be achieved by enabling private car owners to share their existing cars. This concept is called peer-2-peer (p2p) car sharing and turns out to be a hot business model. Google Ventures just invested in US-based p2p car sharing provider RelayRides. In the UK, there is Whipcar and Tamyca just started in Germany.

When it comes to ride sharing, Daimler turns out to be a first mover again by entering the ride sharing market in Ulm and Aachen, Germany, with their new mobile service Car2gether. The German startup Flinc also develops a smartphone-based ride sharing service and currently works on a pilot project in Telekom’s T-City in Friedrichshafen. In the US, there is the VC-backed ride sharing company Zimride that raised $1.2M funding in August 2010.

I believe that p2p car sharing and ride sharing powered by easy-to-use mobile apps will make a big difference and reduce sales of new cars significantly within the next years. It is possible that car makers without a long-term car sharing strategy will have a hard time in the future.

The next step is to move to electric vehicles (EV). The first car sharing operator focusing on EVs is Moveabout from Norway. Currently, Moveabout runs a fleet of 100 Think City EVs and plans to grow to 1.500 cars in 10 countries in 2011. In Germany, Moveabout founded a company in Bremen.

Famous EV network operator Better Place (bankrupt since 2013) built a battery swapping station in Tokyo and powers a small EV taxi fleet of 4 converted Nissan Qashqai. On average, Better Place’s etaxis swap batteries twice a day in less than 1 minute. Better Place raised $700M funding so far and plans commercial launches in Israel and Denmark towards the end of 2011.
t
The future of transportation is electric and social. Etaxis are shared cars with many users per car. Moveabout pioneers electric car sharing. Car sharing now is offered by your neighbours and mobile ride sharing apps fill empty seats in commuter cars. We need to accelerate the green transportation economy with the help of laws, cars, insurance rates and mobility services that support car and ride sharing of low-emission and zero-emission cars.