Vinod Khosla is a wise man and smart green investor. Originally from India, Co-Founder of Sun Microsystems, Partner at Kleiner Perkins and, since 2004, Founder and Managing Partner of Khosla Ventures, Vinod is probably the most successful Cleantech VC in 2011 with 3 successful IPOs already. Not afraid of taking big risks, ready to fail in order to succeed, focused on the relevance of the Chindia price (unsubsidised price competitiveness in China and India) and self-defining as venture assistant helping entrepreneurs build relevant companies, Vinod is a big role model for me. Now he has even more money to accelerate smart green startups. That’s awesome, dude, congrats to all of us! 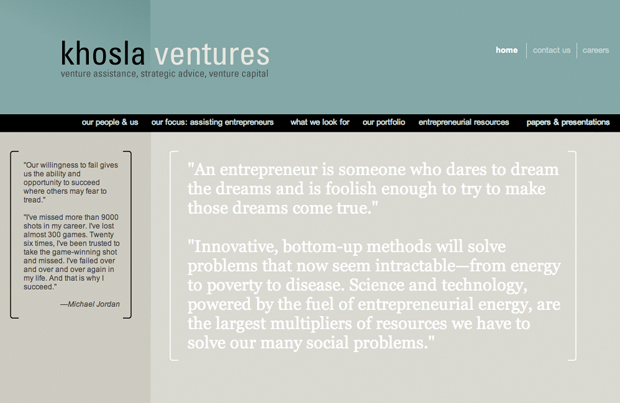 Below I included today’s press release of Khosla Ventures (Business Wire) in full-length simply because it is well written, informative and highly motivating. That’s the spirit! Here’s also the link to Vinod Khosla’s fireside chat with Tony Perkins (vivu.tv) at Going Green Silicon Valley 2011 2 weeks ago in San Francisco which I attended live and previewed prior to my trip to the valley. As I said before, I (still) believe that California is the high-velocity Cleantech Paradise, at least for startups and investors. For many consumers and corporates alike, Germany, and probably some other European countries, are definitely more advanced in the transformation to the Smart Green Economy.

Press Release: Khosla Ventures, a leading Silicon Valley venture capital firm, today announced that the company has raised a new $1.05 billion fund to help great entrepreneurs continue to harvest their potential for breakthrough and innovative ideas. The Khosla Ventures IV fund will further the firm’s strategy to invest in early stage investments in the areas of clean tech, IT, mobile, and Internet technology. “We have identified the ‘Clean Dozen’ companies in clean tech that can achieve unsubsidized market competitiveness and the ‘Cool Dozen’ categories in Internet and mobile in the post-PC world such as big data, emotion, interest graphs and consumer health,” said Khosla Ventures founder Vinod Khosla.

“Instead of following the herd strategy of investing where others are investing, we continue to try and originate new areas in both sectors. We will also continue to attempt new strategies in venture by providing more venture assistance to companies such as putting together an operational group.”

Given the success of the previous funds Khosla Ventures does not anticipate any change in strategy. Khosla Ventures will continue to do Internet, mobile and the clean tech ventures roughly in the same ratio as previous funds. The firm will also continue to invest in IT and cloud services as well as new areas outside of traditional venture capital.

“We fundamentally invest in the companies that we expect to have significant impact, and that’s precisely what the Khosla Ventures IV fund will do,” said Khosla. “We don’t mind failing but do care that the impact be material if we do succeed; and we believe that our willingness to fail gives us an ability to succeed. We will continue to not compute IRR’s when investing as we believe in helping entrepreneurs build companies with high impact and high option value that are not subject to traditional financial metrics.”

“In clean tech, our IPO’s and other exits that have generated almost a billion dollars in profits personify this strategy. We endeavor to be the earliest investors in disruptive Internet and mobile companies which have gone on to complete exciting financings such as Square, Jawbone, ZocDoc and Lookout,” continued Khosla. “Instead of following the herd strategy of investing where others are investing, we continue to try and originate new areas in both sectors. We will also continue to attempt new strategies in venture by providing more venture assistance to companies such as putting together an operational group.” As Khosla has often said, “We are not in the venture capital business. We are in the venture assistance business.”

Founded by Vinod Khosla in 2004, Khosla Ventures is investing in technology processes of the future. The Khosla Ventures IV fund comes after three biofuels and biochemical portfolio companies have completed successful initial public offerings. This includes Amyris, an industrial synthetic biology platform; Gevo, a renewable chemicals and advanced biofuels company; and KiOR, a renewable fuels company that has developed a proprietary technology platform to convert biomass into renewable gasoline and diesel blendstocks. Khosla Ventures remains committed to seeking out disruptors in traditional and unconventional areas of venture investing.