Solar is by far the most important renewable energy on planet Earth. To grow the number of PV systems on global rooftops a lot faster, we have to make the solar purchase decision and PV system operations as simple as possible for consumers. The solution is to package the complex bundle of solar technology, financing, installation, operations and insurance into a super easy solar electricity tariff provided by a new smart solar utility. Sunvigo are the new kids on the block, in this case the residential solar market in Germany. After aggregating a strong partner network including a smart meter operator and several PV installers, the Cologne-based solar-as-a-service startup already have their first happy customers making their own solar power at home while paying only their monthly electricity bill. Most importantly, the 3 co-founders Vigen Nikogosian, Michael Peters and Bastian Bauwens are a great team: intelligent, well educated, modest and ambitious, with impressive track records and highly motivated to maximise their impact until 2030. That’s why Ecosummit invested €50K in the €500K Seed round together with Zurich-based Übermorgen Ventures and other smart green angels.

Following Dendra ($10M Series A), Solar for Schools (raising Series A) and Clim8 (2nd crowdfunding on Crowdcube), Sunvigo is the 4th smart green startup in our ecoportfolio, the first investment this year and the first remote transaction powered by many emails, Zoom meetings and phone calls. Moreover, we acted quite fast taking only 5 weeks after we received Michael’s first message on Linkedin until we signed the Convertible Loan Agreement and wired the money one week ago.

As we want to enable all Ecosummit investors to get to know Sunvigo, too, we invited CEO Michael Peters to pitch at Ecosummit Zoom 3 November 2020. Sunvigo moves fast and their financing strategy is equally aspiring as their growth strategy: the Seed extension round is already in the making and the Series A is planned for the second half of 2021.

Since we wrote about the Solarcity IPO in October 2012, we think that building a smart green utility for smart green consumers is a great idea. We’re sure that Sunvigo will have a lot of impact on the European solar market during the next 10 years and we work hard to support the founders on their journey building Europe’s leading smart solar utility. Let’s co-invest and build big startups with big impact and nice returns. 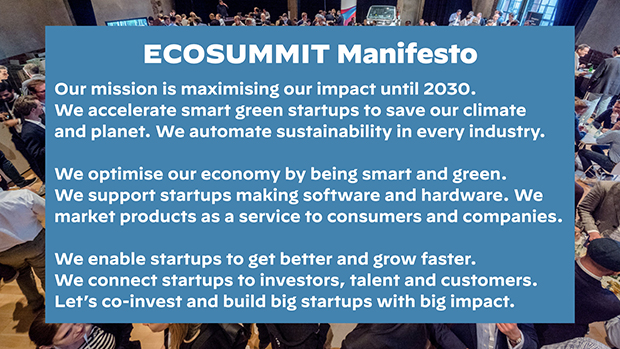