The more I learn about this company, the more I like it. Heliatek is a world leader of Organic PV (Organic Photovoltaics) and they are getting ready to prove it. Since we visited Heliatek 6 months ago in Dresden for Ecosummit TV, a couple of things have happened. Heliatek has a new CEO and a beautiful new corporate identity. They’re in the middle of building the first factory in the world for OPV panels with a roll-to-roll vacuum production process. “For our next-gen organic solar cells we had to invent a totally new production system,” says Heliatek’s CTO Martin Pfeiffer. Heliatek’s factory of the future goes live in 2012. Kleiner, VantagePoint, Khosla, RockPort and DFJ take note: Heliatek plans a new funding round next year and wants the best US VCs in. A multi-billion dollar market is waiting to be conquered and 3G Solar made in Germany volunteers to do the job. 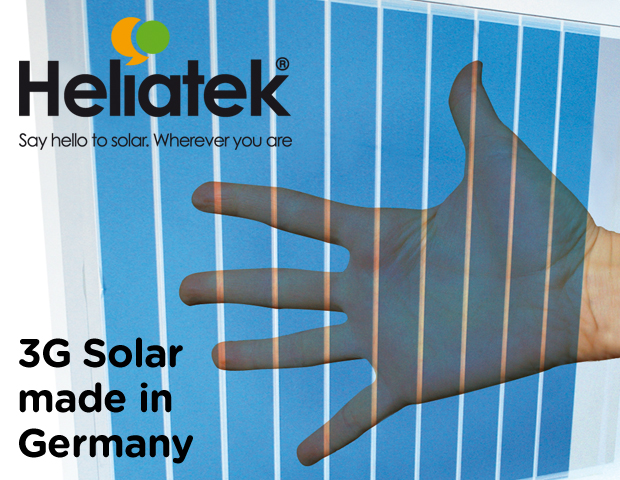 Heliatek’s new CEO is Frenchman Thibaud Le Séguillon. Thibaud brings to the table 15 years US plus 5 years China experience and a lot of manufacturing know-how he honed as President of Parlex. Thibaud recently told me at the 26th EU PVSEC in Hamburg that he joined Heliatek because of its disruptive technology and huge market potential. For a sales pro like Thibaud this is the perfect mix. After the headhunter first called him, he googled Heliatek and found our 2 Ecosummit TV episodes embedded below, a welcome opportunity to get to know his future colleagues and to prepare for the interviews.

Thibaud and Martin both believe that their business case is superior. They will soon prove it. Heliatek’s new OPV panels will provide more energy for less money while consuming very little resources during production. Due to being material-efficient and lightweight, OPV can take solar to places where it has never been before. Among Heliatek’s target industries are automotive, buildings, consumer electronics and fashion. In the near future, we will see cars with Organic PV skins, smart green buildings with semi-transparent blue facades, foldable green mobile device chargers and new functional fashion that heats you up or cools you down thanks to its new hybrid climate energy control fabric.

Being such a fan of Heliatek, I am happy that Thibaud agreed to speak at Ecosummit 2012 and also plans to apply for our upcoming Ecosummit 2012 Award. Without further ado I recommend you watch Heliatek on Ecosummit TV immediately. It’s weekend and a perfect time to learn something new.